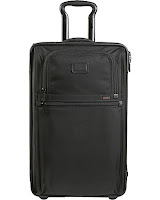 If you're flying in the U.S. and want to check a bag, let's hope you're on Southwest Airlines. Otherwise, open your wallet or pack well and carry on your bag.

The latest issue of Consumer Reports magazine has a "Toughest Travelers" rundown on which carry-on bags with wheels are likely to hold up well over time.

I'm personally not a big fan of rolling carry-ons since unless you're loaded up with electronics in the same bag as your clothes, it shouldn't be so heavy you need wheels. And the word "heavy" goes with the wheels since they add anywhere from 3 to 6 extra pounds. They also subtract from the available packing space since your bag is technically supposed to fit in those little frames they have near the ticket counter. Unless you're going to spend most of your time traversing airports, you're better off with something you just carry, either as a duffel bag or a backpack.

But anyway, on to the results. In some cases, you do get what you pay for. The bag that 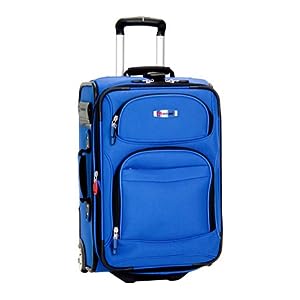 performed noticably better than the others was the Tumi Alpha 22-inch. (I think anything over 20 inches long is taking a risk when it comes to qualifying as a carry-on, but that's how it's listed.) This isn't much to look at and it lists for a hefty $595, but it has a fold-out garment bag and was the only bag to get a high score in three criteria: durability, capacity, and convenience.

A couple years back Budget Travel magazine did a run of tests with larger rolling suitcases and the Tumi one fared there as well, coming in second.

Next up in the Consumer Reports list were versions from Victoronix, Hartman, Briggs & Riley, and TravelPro. But the testers really liked the Delsey Helium Fusion (pictured to the right) because it was only $77 compared to hundreds of dollars for the others.

Missing from the tests was anything from Eagle Creek. I've been using their 22-inch Hovercraft rolling bag when I fly Southwest in the U.S. and like it a lot. I'll run a full review of it next week.

wow.. cool bags...are they big enough for one bag journey to anywhrere?

Depends on how you pack I guess. If you're good at it and don't bring too many pairs of shoes, any should work for a normal trip.