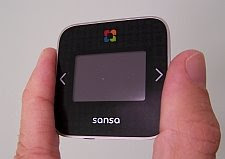 The Sansa slotRadio is a strange concept, but it works brilliantly in practice. It’s a pre-loaded MP3 player with 1,000 songs, plus a radio, all in a tiny clip-on package. Put a new chip in the slot, you’ve got 1,000 new songs instantly.

I love my iPod Classic, especially when I’m on a long flight or I need to keep my daughter entertained while traveling. The thing is, as user-friendly as the whole interface is, I’m really lazy about loading it up with new music, despite the fact I’ve got a thousand CDs sitting one room away from the computer…and I have an eMusic

subscription…and I review new world music albums every couple months for Perceptive Travel. But unlike a teenager with all the time in the world, I always seem to have something else higher on the to-do list.

So I was intrigued by the idea of this Sansa slotRadio player as a time saver and I’ve enjoyed it far more than I expected. First there’s the level of surprise, which is ever better than it is with the iPod Shuffle because you really don’t know what’s coming next. You didn’t load it up to start with. Plus you can see the artist and song name on the display—my main beef with the Shuffle. It’s almost as small as the 2nd generation Shuffle though, and has a clip on the back, plus it has a radio for listening to NPR or local music in a foreign country. Not a bad value for a hundred bucks including the first 1,000 song sampler.

A reminder---this blog is moving! Subscribe to the new feed.
Posted by Tim at 9:36 AM