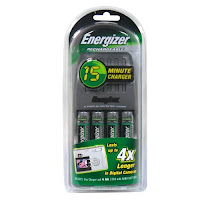 With a portable battery charger and a set of rechargeable batteries, you can help the planet and save money long-term as well. A minuscule fraction of batteries get disposed of properly, which means a lot of acid and toxic minerals going into landfills every day. In developing countries, you'll also see them tossed by a roadside or getting into the water supply via a riverside.

Wired magazine tested four models of rechargeable batteries in its April issue, snapping pictures on a digital Canon camera and measuring the number of photos per charge. They also looked at charger time, which ranged from 620 minutes down to 13 minutes.

The top choice in the number of photos per charge was actually the cheapest option: the Duracell 2650 mAH, which run about $4 a battery or $15 to $25 for 2-4 batteries with a charger. With a regular charger they took an incredible 10 hours 20 minutes to fully charge, but for an incredible output: 1,377 photos.

The fastest charger was the Energizer 2450 mAH, which only got 693 photos snapped, but charged in just 13 minutes with the included fast charger. I found a great deal on this package at Amazon: for under $25 you get the quick charger, two AA batteries, and two AAA batteries. And it qualifies for free shipping.

In the middle were the Sanyo Eneloop (759 photos per charge, 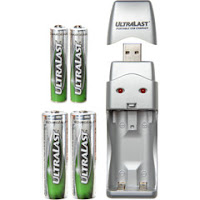 The UltraLast line is interesting though because of the chargers that are available. There's one $25 package on Amazon that has a wall charger, a car charger, and a sleek USB charger plus four of each size of battery. That's a bonafide bargain and in my book that puts it in the lead. I'll take the average performance if you throw that much into the package.

The USB charger would be quite handy too if you're a business traveler or a flashpacker. It takes up less room than the other options and if you're staying at the kind of hotels where you're going to be plugged in and working at a desk, you can just piggyback onto that power supply without the bulk of a wall socket charger.

Search for more rechargeable batteries and items at Gaiam.com

Editor's note: in May this blog will move to its own domain, where I'm be joined by a female gear reviewer and a frequent business traveler. Get ahead of the game by adding that RSS stream to your reader at PracticalTravelGear.com.
Posted by Tim at 7:27 AM

It should be noted that the pre-charged batteries have quite an advantage in that they discharge very slowly. While a normal NIMH rechargeable will drain in a matter of months, the pre-charged ones retain most of their charge for a year or more. This is especially useful for things that don't use up a lot of energy over a short period of time, like clocks, remote controls, or wireless keyboards and mice. (The advantage doesn't quite hold for digital cameras because they drain the batteries quickly, but even so a pair of pre-charged that have been sitting at the bottom of your bag for a few weeks can still be considered good to go without topping off.)

Good point Craig--thanks. I have indeed had wireless mouse problems with regular rechargeables, but the precharged ones are better.

Thanks for continuing to post about this. I cringe when I see those 40-packs of throwaway batteries at Costco and Wal-mart. Where do the buyers think all those are going when they're finished?