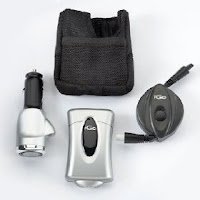 If you want an example of an industry that is about as far away as you can get from "green," it's the consumer electronic gadget industry. There are four cell phones in my house and every one of them has a different charger connection for both the wall outlet and the car. (This includes two phones from the same manufacturer). Then you need a different charger for a Blackberry, an Apple device, a handheld game device, every digital camera, and on and on.

So when you travel with your gadgets, you are forced to carry along a whole array of chargers to keep everything juiced up. Unless you have a power adapter from iGo that is.

If you pack an iGo and a few tips to fit your particular gadgets, you can carry one charger that works for everything. Instead of three or four different plugs, you've got one plug and the interchangeable tips---all fitting into a handy little travel case. Despite the small size, it's also dual-voltage, so as long as you're carrying a plug adapter too, you can use this around the world.

After I wrestled with the treacherous plaster blister pack the iGo Everywhere came in, the device was intuitively easy to set up and use. The plug itself is one part, the retractable cable is another, and then each tip is separate. So the whole thing takes up about as much space in your bag as a pack of cigarettes would. The $40 "iGo Everywhere" version also comes with a car charger. It worked flawlessly charging up my iPod and phones as fast as the proprietary charger does. 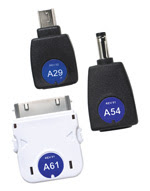 The tips are labeled with cryptic markers that don't mean much (A133 for an iPod for instance) and the main downside of this product is that you have to buy each tip separately, at a list price of $13 a pop. So if you have four devices with different connectors now, you're up to $92, or more than $100 if you buy the splitter to enable you to charge two devices at once.

In comparison, the Chargepod Callpod I reviewed before has a much bulkier profile (mainly because of the clunky plug), but it will charge six devices at once and you can buy an $80 bundle pack that has the six most common plugs supplied---including USB and mini-USB.

Overall, this is a sleek and cool device that solves a major annoyance for frequent travelers. If packing small and light is more important than the simultaneous charging offered by the Callpod, the iGo charger could be a worthwhile investment. Just understand that you will have to pony up $13 every time you get a new gadget---unless the electronics companies join the 21st century and start cutting down on wasteful proprietary connectors.

Get the iGo products at your local electronics store, Amazon, or igo.com.
Posted by Tim at 5:08 PM