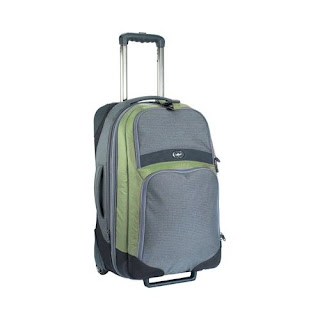 The current issue of Wired magazine puts four rather pricey rolling carry-on bags to the test and the reviewer is not exactly blown away. The best one in the bunch gets a 7 out of 10, two rate a 6, and one ranks a 4---despite a list price of close to $500.

First, as I've said before, wheels take up a lot of space and add a lot of weight, so think about whether you are really so frail (or your bag is so heavy) that you need them. Lots of time going between airport terminals? Then maybe. Flying straight to your destination then taking a taxi to a hotel? Then probably not.

Second, with those wheels it is not so easy to fit inside the true limitations of a carry-on bag. True, you can get away with more that the 45 linear inches total supposedly allowed on most airlines, but I dare you to try to fit anything larger onto one of those 3-seat-across planes you get crammed into so frequently now. Technically something that is 22 inches long is okay, but in reality that is often too large and the weight will be too high for European budget airlines.

pictured here. But here's the rub: "At 8 pounds it's tied with the Tumi for lightest of the 22-inchers. That weight is mostly from the wheels. My leather duffel carry-on holding the same amount is 2 pounds.

The Tumi T-Tech Polycarbonate one looks slick and the reviewers thought it was as strong as a bank vault, possibly impervious to the apocalypse. The design will turn heads and it was easy to pack, but "a real shin-buster" and a list price of $395.

A Victorinox Werks Traveler 3.0 WT-22 could have won the "longest product name" category, but it scored only a 6 due to being large and bulky and having "a wobbly grip that makes it tough to negotiate tight corners." It's half a grand too, which is way too much for a suitcase unless it's going to make breakfast for you too.

The Samsonite model they reviewed was almost as expensive, at $465. For a Samsonite! They liked the quiet wheels, 3-level handle, and TSA-approved locks. But "for this price, imitation carbon fiber shouldn't wrinkle at the edges or pick up smudges."


Need Luggage or a new Carryon?
Up to 60% Off on Luggage, Handbags, Backpacks & More. Free Shipping at eBags.com

Hi!!!
your blog is really a nice one and your way of presentation about wheel bag is great.Because it's easy to move wheel bags when it is heavy.