When you're driving in your car, talking on a cell phone can be distracting. When you start dialing numbers with your fingers while you are driving, you become downright hazardous.

In some states (and countries) you could get a hefty ticket for dialing while driving, in others it's just not very smart. Enter the Parrot Minikit Bluetooth device. With this clipped to your visor, you can dial away and chat away without ever touching your actual phone.

I normally shy away from the most geeky travel gadgets, but this one is truly practical. It also does exactly what it's supposed to do, without requiring hours consulting a manual. You just sync it up with your Bluetooth-capable phone (easy), clip it to your car visor, and start using it. When someone calls, you touch one button and start talking. Press the same button when you're done. The manual is only six pages long.

Here's the really cool part though: its software "reads" all the contacts in your phone and when you just say that person's name, 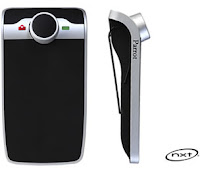 the device dials it for you. On a four-hour road trip I made a series of calls with no hitches. When I first turned it on, the Minikit asked, "Who would you like to call?"

I replied, "Mom," A few seconds later, I was chatting away with my mother. I tried my wife, my dad, and a couple names--one being a rather odd foreign one that the Minikit nevertheless picked up on and dialed. You can specify which number to dial if you have more than one for that contact, such as "Paul mobile" or "Cindy home."

The only real drawback is the sound quality on the other end. Like most speaker phones, the device picks up a lot of extraneous car noise, so it's not as good as say, a Jawbone that has a built-in filter. The person talking to me sounded fine though.

The Parrot Minikit plugs into a car charger to recharge. The regular Minikit looks like a small science fiction spaceship model, but I tried out the Chic version, which lives up to its name. It's fashionable enough to get some, "What's THAT?" questions from passengers and is far more minimalist than most of these nerdy devices. There is no visible speaker: a vibrating panel of the device itself supplies the sound. It lists for $110, but goes for less at a lot of outlets. Very cool, very useful, and yes, practical.