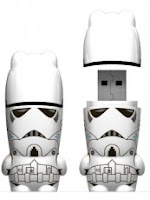 Almost all of the travel gear reviews I run on here are based on items I've tried out myself, but sometimes an item is just so perfect that I know I'd buy it immediately. When someone from SeekingDesigners.com contacted me about these cute Mimobots, they screamed out "cool stocking stuffer!"

Let's face it USB thumb drives are pretty much all the same if you go with the basic features. They get the job done and they're fine. But if you have someone on your list who likes to instill a little style in his or her workplace, one of these might be the ticket.

There are a variety of designs, some more feminine, some for those with a Star Wars fetish. (Besides the Storm Trooper one here, there's also a funny Chewbacca one and a not-so-scary Darth Vader.) Some are based on Japanese manga figures, so there's another obsessive type you can take care of. 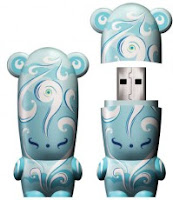 They come in capacities from 1 to 8GB and are loaded with character-specific animation. See a quick sampling of Mimobots at the Seeking Designers site, where there's also some background on the artist.

To actually buy them though, you need to head over to the Mimoco site, where there's a whole slew of new ones posted on a regular basis. Most designs are $18 to $25 for the 1GB version and go up from there. Buy a few and you'll get a sizable discount.
Posted by Tim at 7:55 PM

They are cute and I'm likely buying one to give as a Xmas present. Unfortunately they charge a bit too much for the 8GB one, the kind of standard at the moment on the marked. Adding $65 on top of the basic 1GB one, it's a lot (as the design of the product does not change): 8GB USB drives are available on the market for less than $20.

Yeah, but you're paying for the stylishness, right? There's no reason a Macbook Air should cost so much more than a comparable Windows netbook either, but people who want to look cool gladly pay it.

Thanks for the post. We really appreciate the support! If you're a Star Wars fan, here's a little secret.. Boba Fett is on sale today on our site for 50% off until midnight 12/10 EST. Cheers!

I have lost three thumb drives in the past year, so maybe I need one of these so it won't be so boring I leave it behind somewhere.