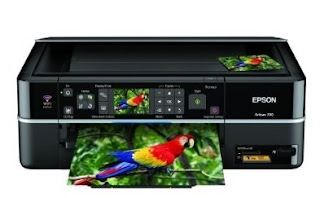 In these days when contract manufacturers in Asia are building almost everything electronic, you would think brands don't matter much. But when it comes to printers, Epson seems to always have the edge for models that handle photos well. I just got a confirmation of that when trying out a new Artisan 700 3-in-1 printer from Epson.

First of all, man have these printers come down in price. A few years ago I paid around $320 for a highly rated Canon one, then my last one with even more features was $160 online last year. This Epson model lists for $249, but even the Epson site sells it for less and you can routinely find it for close to $150 on sale. Of course part of this is the razor blade model: don't charge so much for the printer, but soak everyone badly on the ink. This Artisan line uses six, yes SIX ink cartridges, so you'll be spending a pretty penny if you run off hundreds of photos on a routine basis.

If you're like me though, you've got a thousand or two photos on your hard drive and it seems you rarely get around to printing them out. Sometimes you just want one or two of them and you don't want to pop by Wal-mart or put in an order through Kodak Gallery just for that. So it's helpful to have a printer in the house that can do the job well.

Earlier I reviewed Epson's PictureMate model, which is dead simple and handy for just doing 4 X 6 prints. This one is a different story. There are more features than I'll ever get a hang of, but in short it will print any size photo up to 8.5 X 11, will print a few on one page, will print out picture CDs you've burned, and will work as a regular printer and scanner. Furthermore, it does all this through a network and wirelessly as well.

It took me a few dud photos to realize I needed to tweak the printer settings each time I did a new task, but once I figured that out I ended up with photos that were really close to what I get from a commercial printing service. Suitable for framing. It seamlessly hooked up to my network and printed out photos from a computer on the other side of the house. It printed others from my wireless laptop. (I just had to install the drivers.) The printed CDs were the only disappointment. They look fine, but you can just print a picture onto them---no ability to add a track listing for music, or even a title, unless you're able to create all that in Photoshop beforehand and save it as a file. It's a whole lot faster to just break down and use a Sharpie.

I compared the pics to what comes out of my 4-cartridge Canon Pixma and must admit those other two cartridges do seem to help: my Canon shots weren't as accurate or crisp. They took longer to print too.

The scanning, copying, and document printing have been going fine too in my tests, so this is a great workhorse printer that can do almost everything you need done, without taking up a lot of space. It even prints on both sides of the paper if you want and with a two-year warranty, you should be set for a while. With this as your home printer, you can get some of those photos out of the virtual world and into the real one. See more features at the Epson site.

How is a printer an item you could class as "Practical Travel Gear"?

I have reviewed a few photo printers and the like because I think it is important to save some of your travel photos or share them. Or heck, frame them. This thing prints 8 X 10s!