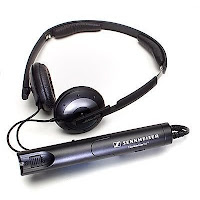 "How do you like those headphones?" I will ask the biz travel road warrior beside me on the plane. "Aww man, they're the Bose ones. So they're awesome." This exchange has become a private joke for my own amusement. If you paid $300 for something that others have bought for $100, it simply has to be awesome, right? Otherwise you were duped.

But of course when I probe further, none of these travelers I have sat beside has ever tried another alternative. They've got no comparison. So I was happy to see a scientific review of noise-canceling headphones in Consumer Reports a couple months ago. Do the Bose headphones really rock? Are they three times better than the alternatives?

Well, yes and no. Out of five models, the Bose ones came in second, above the Sony ones ($90), a PXC-250 sister model to the Sennheiser ones I use regularly ($60 at Amazon), and the Koss QZ77 model ($38 at Amazon). But the top pick was the Panasonic RP-HC55, which has small in-ear buds and retails for $60. For those who are good at doing math in their head, the #1 choice was 1/5 the price of the #2 choice. (Hey, all that Bose marketing is expensive!)

The beauty of the Consumer Reports study is that they did what none of us reviewers and bloggers can manage: scientific analysis. They actually went into a lab and measured which ones did the best job of canceling noise and which ones reproduced sound most accurately. Ten headphones entered, but five were sent home.

The remaining five were all recommended, which means you can do okay for $50 or great for $60 to $300. The Panasonic RP-HC55 model tied with the Koss QZ77 for tops in noise reduction. The Panasonic, Sennheiser, and Bose ones tied for Sound Quality.

I can't link to results because the Consumer Reports website is subscription only. (They don't run ads, so it's only fair.) But here's the lesson: don't believe the hype. Something expensive may be good, but just because it's the most expensive doesn't mean it's the best.


Get the Sennheiser model
Get the Koss earbuds
Bose QuietComfort 2
Panasonic
Posted by Tim at 6:29 AM

I had this for about 2 years now, and it works really great for travelling, especially when travelling with a plain:) Not very practial for a everyday use, but the sound is very good, and the noiseguard really does work!

I just ordered the Sennheiser ones from Amazon. They have apparently gone up to $76 (too much good publicity?), but I got free shipping, so still a bargain.