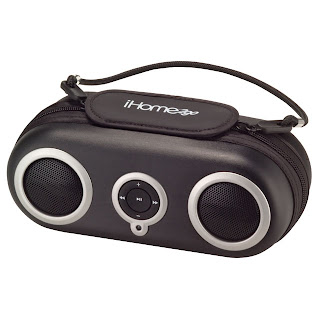 I've tried out quite a few portable speaker contraptions for an iPod or MP3 player and most of them weren't even worth mentioning on here, especially when it came to sound quality. The Altec Lansing Orbit speaker is pretty decent and is easy to pack, but with only one speaker you're obviously not getting stereo sound.

This iHome2go IH13 combination water-resistant case and speakers is better than most because it has real speakers that crank out the sound. Real bass! Real cymbals crashing! It sounds as good as most computer speakers in a small room and pumps out enough volume to fill a big living room or work for a backyard barbecue.

Plus the design is pretty inventive. Basically this is a zippered case that keeps your iPod dry (there's a special foam encasement for the Nano) and you can control volume and track forward/backward on the front of the case without opening it. It comes with a strap allowing you to carry it and there's a connection cord for non-Apple music players.

There's one big drawback however: weight. This puppy is heavy, as in barely less then two pounds. If you're hopping into a car or stuffing a light rolling suitcase full of clothes it might not matter, but if you're a backpacker or a carry-on traveler, that might provoke some serious pondering. The other drawback is that this is a wasteful, 4-AA-battery-sucking, landfill-soiling machine the way it comes packaged. It's $40, which is certainly a fair value, but then you find out the AC adapter is $22. Seriously! The adapter is more than half as much as the whole damn stereo system. There's a combination package on their website for $50, but only in pink or green camouflage. For the Army men and women I guess...

No problem though. The connection on the back is (for once) the same one used by most standard electrical devices with an adapter, such as that cordless phone you have in the basement, so just dig up another adapter and spend $22 on iTunes

instead. When the AC adapter is plugged in, your iPod will charge as well. There's a warning in the instructions that you must use their adapter, but last time I checked they all let through the same voltage.

The iHome IH13 portable speaker system is anywhere from $32 to $40 at retail depending on where you get it, including at Amazon. I got mine by trading in some "No Hassle Miles" from my Capital One credit card though, so look for it in whatever mileage/points program you use.

Rocking iPhone/iPod Devices for your Home, Office & More at iHome!

I have to update this review by saying this unit died completely six months after I bought it, with very limited use. It just stopped working one day, batteries or A-C, and smelled like an electric fire.

The full-bodied, 360-degree sound will make your friends wonder where the speakers are.