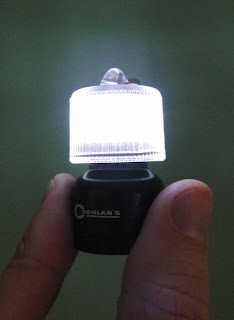 If you want to pack light and still illuminate your whole tent, you can't beat this Coghlan's LED Micro Lantern. It's so small and cute it looks like a Christmas tree ornament, but it cranks out an impressive amount of light from its tiny package.

The output of light is 3.5 lumens, which doesn't mean much to me, but it seems to rank somewhere between a single-LED keychain flashlight and a "real" flashlight with two or three LED bulbs. It won't illuminate the whole campsite, but fine for a cheap guesthouse room nightstand or a two-person tent.

Unfortunately, the small size doesn't allow it to use rechargeable batteries, but the two CR2032 coin-style batteries keep it going for 25 hours before they need to be replaced. Or if you're lost in the woods, they'll flash for 50 hours.

Considering that this micro lantern is only two inches hight and not much bigger than my thumb, it'll be easy to pack no matter how light I'm traveling. It's water resistant and weighs less than an ounce (24 grams). See more about it on the Coghlan's product site.

You'll have better luck finding this at a camping store than a regular gear store. It generally goes for $8 to $10, but Walmart.com has it for$6.74. A great bargain.
Posted by Tim at 8:02 AM