Putting together a collection of photos in a EuroBook from dotPhoto is like working with anything else that boasts of "German engineering." A lousy interface and a steep learning curve, but an impressive end product once you figure it all out.

I have put photo books together before through Kodak Gallery and Shutterfly and have been quite happy with the results. So when someone from dotPhoto asked me to try out Eurobook, I was glad to give it a shot.

The experience did not start off well. First, you have to download their proprietary software to your computer in order to get started---no web interface option available. You would think that would speed things up, but it doesn't. I found each step to be far slower than the ones I've encountered with the other companies I've used. I eventually grabbed a magazine to read while listening to my PC grind away. All in all it took me close to three hours to complete the book, counting one false start I had to scrap.

All the coding creativity went into the back end of the software, apparently, as the interface involves a lot of pop-up windows and almost useless help menus. Then you basically have to cede total control to its design wizard unless you just pop in photos where you want, which defeats the purpose of using software that resides on your computer.

So why go through all this? Well, the design wizard is pretty cool IF you understand how it works. Its objective is to take a collection of photos you throw at it, with just a number of pages you pick and an average number of photos per page. Then the wizard does its work and lays out the pages itself in an attractive way, using some as background as well. Photos can fill a whole page and then have a small one inset, can spread across two pages, or can appear on a page with several others. In essence, you are saying, "Surprise me" and letting the software do its stuff.

When this works, it really works. When it doesn't, well, that was my first lesson. I selected a whole bunch of travel photos from different trips. What I ended up with was a mess. Argentina mixed with Mexico, Hungary mixed with Peru, and me looking five years younger in one shot than the photo next to it. So after all that effort going down the drain, I stuck to one part of one country---the Yucatan---and found a box that let me tell the wizard to put then in date order. Voila! I still had to go in and move and resize some things, but overall it looked great. 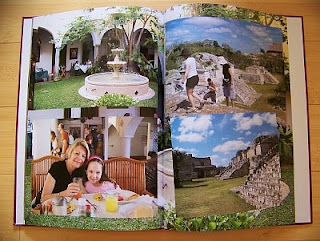 I then put in the order, specifying what kind of cover I wanted, and it arrived about a week and a half later from Germany. The price was around 50 bucks including shipping, which is in line with U.S.-based competitors' books that have a nice linen cover with a window. My book was 34 pages too, which is more than some online services will allow.

Be prepared to set aside some time to put a book together, but if you want to take some of those digital photos sitting on your computer and make something lasting you can pass around or give as a gift, this is the most designer-looking option I've come across.

See more at the dotPhoto EuroBook site.
Posted by Tim at 1:11 PM