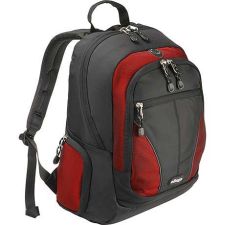 I'll admit it. I absolutely detest traveling with a laptop. I hate it so much that I bought a little laptop that weighs only three pounds. But sometimes you have to do it. Duty calls and we all have to make a living.

But while walking around with some hip designer laptop bag might score you points in Milan or New York, in much of the world you might as well be wearing a big fat sign that says "Please steal my laptop!!" It's best to be incognito, to look like you're just bumming around taking photos and writing in your journal, not carrying something around that costs more than the average citizen earns in a year.

So I put a laptop backpack on the list for my last birthday and what showed up on that fateful day was a beauty. It's an in-house job from eBags that really delivers. It's cushioned well, but doesn't add a load of bulk. There are plenty of pockets around for storing your jump drive, memory cards, and good ole paper files. A pocket for the water bottle and room left over for a music player and a camera. Yes, you're still carrying around enough to feed a local family for a year, but at least it's not so obvious this way. Comes in lots of colors too, so you can avoid the neon.

Briefcases and Laptop Bags at eBags.com